If you’re from Kalamazoo, or anywhere near western Michigan, or if you’re a WMU Bronco, or even if you watch ESPN and pay attention to national football news, you know that there’s something special going on with the WMU Broncos this year.

WMU, under coach PJ Fleck, is 10-0 for the first time in school history. They are currently ranked 17th in the nation, according to AP, and 21st in the national college football playoff rankings.

Pretty amazing, for a school that was 1-11 just a few years ago!

PJ Fleck has come in and changed the culture. He is a fiery, inspiring Head Coach, and it is virtually impossible not to be motivated when you hear him speak.

One of Fleck’s main motto’s is “Row The Boat”. 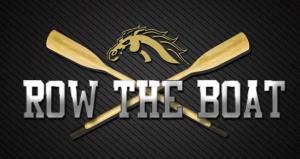 It’s a reminder and rallying cry to keep pushing, be willing to sacrifice, and to surround yourself with ‘Elite’ people who are going to positive places. It is also shown with the hashtag, #RTB.

When he first came in to Kalamazoo and started this, I admit (as a WMU Alumn) to making fun of it. After all…Broncos and Boats have nothing to do with each other! However, when I heard the story behind it, I corrected myself. It is a great ‘rallying cry’ for the team, and the community of Kalamazoo, as well as a great reminder to challenge ourselves to ‘go higher’.

So, what’s this have to do with me? With you? With church or Faith?

Well, some of you may know that a pretty big event happened this week in America when Donald Trump was elected as our next President of these United States.

Some cheered, others jeered.

Honestly, for the first time in my life when the party I voted to won…I could not cheer. I am disheartened that these were our choices. However, that’s what they were, and we had to choose (I’ve written a lot about my feelings about this election–you can read past blogs if you’d like).

However, here it is: We have had an election, and now we are in the ‘transition’ phase. One thing that has always set America apart as unique is our ‘peaceful transition of power’ from one President to another…often from one political party to another. I hope and pray that this particular ‘transition’ is peaceful.

I want to suggest–especially for Christ followers–that you and I need to Shine The Light!

Jesus said “You are the light of the world. A town built on a hill cannot be hidden.Neither do people light a lamp and put it under a bowl. Instead they put it on its stand, and it gives light to everyone in the house. In the same way, let your light shine before others, that they may see your good deeds and glorify your Father in heaven.” (Matthew 5:14-16)

As Americans, we have–for years–bought into the idea that, ‘If we can just get Our Person elected, everything will get better.’

Even the Church in America has bought into this–much to our shame and detriment!

Politicians–no matter who they are, or how ‘godly’ they’ve been, have never been our hope. America’s hope has been found in her people–especially those who are also ‘citizens of heaven’ by faith in Jesus Christ–loving others and putting others first.

Unfortunately, today America largely rejects Jesus and the influence of the Church. This election is not going to change that.

The only thing that will change that is if the ‘people of God’ in America experience a ‘Revival’ of the Holy Spirit in their lives, and begin to live it out again–not in politics, but in love, compassion, service, forgiveness…

In other words, it won’t happen unless we start to “Shine The Light” of Jesus in tangible ways.

It’s not ‘news’ to anyone that this election has not been hard to take…for many, the outcome is producing fear, anxiety, anger, etc.

I don’t believe those feelings are warranted, but I understand them, based on what President-Elect Trump has said in the past.

The question for us–who are Christ-followers to answer is, ‘Are we going to wait for the President to do what God calls US–as His Children–to do?’

It’s time for all of us–red, yellow, black, white, brown, purple, chartreuse… ESPECIALLY those of us who call ourselves Christians…to come together and ‘Shine The Light’!