was a Lutheran Pastor and Theologian in during the reign of Adolf Hitler. While many Pastors in his country were keeping silent, and ‘going along in order to get along’, he would not. He believed that it was the responsibility of those who knew Jesus to stand up to tyranny and oppression.

He said, “Silence in the face of evil is itself evil: God will not hold us guiltless. Not to speak is to speak. Not to act is to act.”

In other words, when we–as Christ followers–see injustice, tyranny and evil happening in our world, it is our responsibility–as followers of Jesus–to do what we can to stop it. Not doing so is a decision we’ll have to answer for. 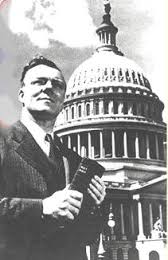 , Chaplain of the US Senate, said “If we don’t stand for something, we’ll fall for anything”.

In other words, we must–especially as Christians–stand for those things which reflect the Word and heart of God.

In our culture today, the teaching and values of the Word of God are being increasingly mocked and marginalized.

It’s almost as if our culture is daring Christians to stand up and say something.

This is really nothing new, however.

Back in the book of Acts, when the Church was just getting started, opposition arose. Many voices of the culture–especially the religious culture–wanted to quiet this new message–the message about Jesus of Nazareth, the risen Savior and Lord of all.

Stephen, a ‘Deacon’ in the Church, was challenged. He was confronted with a choice. He could either stand up for Jesus, or try to compromise–to ‘go along’, to minimize the differences between those who worshiped Jesus and those who rejected Jesus–in order to survive.

Note–this wasn’t just about some vague pressure to conform. This was a situation that threatened his very life!

If he ‘made nice’, he might survive. If he stuck with Jesus as risen Savior and Lord, he may die!

Fortunately, Stephen’s faith was strong. He stuck with the Lord…and he was stoned to death because of it. However, he knew that eternity was awaiting him. God gave him a vision in the midst of this opposition: “I see heaven open and the Son of Man standing at the right hand of God.” (Acts 7:56)

All this did was make his opponents more angry, so they rushed forward as one mob and took him out of the city and began to stone him, in order to silence and kill him.

Stephen knew that death was not the end. He knew that Jesus had conquered death–therefore, their threats meant nothing to him! “While they were stoning him, Stephen prayed, “Lord Jesus, receive my spirit.” Then he fell on his knees and cried out, “Lord, do not hold this sin against them.” When he had said this, he fell asleep.” (Acts 7:59-60)

Stephen’s faith enabled him to stand against opposition.

May we–all who claim to be Christ followers–have the strength to stand up against opposition, even if we have to stand alone.